﻿ How Much Do ESL Teachers Get Paid Overseas? 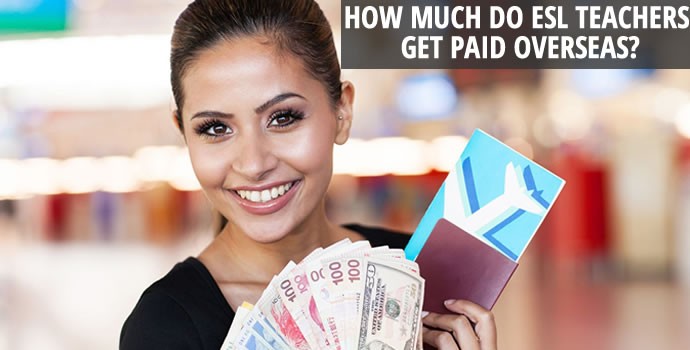 How Much Do ESL Teachers Get Paid Overseas?

The average salary for K-12 teachers across the United States is about $45,000 per year. Of course this number varies greatly based on several factors, particularly location and experience. The same formula applies to ESL teachers abroad. Most people who decide to teach English overseas do so for the cultural experiences and travel opportunities. But there are others who have financial plans such as paying off student loans, buying a home or starting a business after completing a 2-3 year contract. But how much can you expect to get paid overseas?

When comparing two available overseas ESL teaching jobs, you’ll likely jump on the opportunity with the best pay and location. But salary alone does not tell you how much you’ll really be making when your contract is completed.

Saudi Arabia typically has some of the highest paying ESL teaching jobs in the world. You can see that for yourself just by browsing online job listings. But it’s not just the amount of your paychecks that make Saudi Arabia an ideal destination for those who are in it for the money. Citizens of the United Kingdom are attracted to Saudi Arabia because most of their income is tax-free. It’s not that cut-and-dried for U.S. citizens teaching in Saudi Arabia and other high-paying countries. But there are many tax rules you can take advantage of to lower your liability.

The Foreign Earned Income Exclusion is the primary benefit that lowers tax liability for U.S. workers in foreign countries. The first $99,200 (as of 2014 IRS rules) earned from your job is exempt from income taxes. Virtually everyone is eligible for this benefit with the exception of federal government employees. No matter which country you work in, you’ll always have to file a tax return at the end of the year with the IRS. Many other countries tax your income before the IRS get their hands on it, amounting to double taxation. In those countries, U.S. workers can take advantage of the Foreign Tax Credit. It allows a credit based on the dollar-for-dollar amount your host country charged in taxes. Simply file IRS Form 1116 with your tax return to receive the credit.

It’s always advisable to take jobs that pay for your housing. But if you’re stuck paying monthly rent for your residence in the host country, there’s also a benefit for that. The IRS’ Foreign Housing Exclusion can save you thousands every year, but isn’t as simple as the other benefits as far as the deductible amount and eligibility. Make certain you talk with a tax professional before claiming this or any other exclusion. Sure, certain countries pay more than others, but those additional earnings are sometimes negated by the cost of living in said countries. The same can be said for countries with a lower cost of living. You might get paid a bit less in salary, but the low cost of living makes it more than worth it.

The United Arab Emirates not only is a high-demand country for ESL teachers, but also has some of the highest salaries. Some teachers earn upwards of $5,500 per month in both Dubai and Abu Dhabi. The catch here is that the UAE is an expensive city to live in. Those teaching in public schools in the country typically get the highest salaries versus those in private schools that earn the lowest. Kuwait and Japan also pay more than most other countries. Kuwaiti jobs, however, typically require certification, whereas many opportunities in Japan do not. But the job landscape in the latter is far more competitive, so the more credentials you have, the better.

ESL teachers in Vietnam don’t get paid near as much as those in the UAE, but the cost of living in Vietnam is far lower. I earned $1,700 per month in Vietnam (my first overseas ESL jobs) and saved nearly 60% of my salary the first year. South Korea and Taiwan have similar setups with lower pay but also lower living costs. Americans are conditioned from birth to believe our national economy is only healthy when we’re spending money. We’re a consumer culture that values status symbols like automobiles, homes and fancy clothes. If making a lot of money is one of your primary goals of teaching overseas, divesting of our material ways is an absolute necessity.

In sum, I’ve made anywhere from $1,500 to over $3,000 per month during my five years of teaching overseas. Although the salary can vary depending on the job you take, a dollar stretches much further in most foreign countries. Maximizing earning ultimately comes down to your efforts and discipline towards fulfilling that goal.

Arm yourself with an Oxford Seminars TESOL/TESL/TEFL Certificate, and you can begin to enjoy the life of a successful ESL teacher!